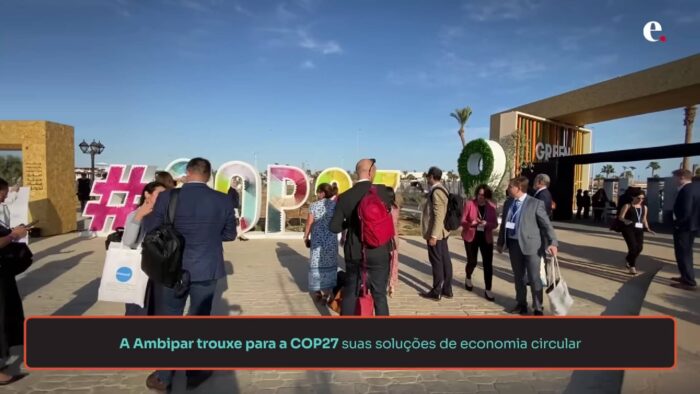 Some good news and some not so much: this is the balance of COP-27, the 27th Conference of the Parties of the United Nations (UN), held in Egypt in November. Looking at the glass half empty, there was an expectation of progress in the organization of the global carbon market, after the definitions on the subject at the previous COP, but this did not happen. There was also an attack on the goal of limiting global warming to 1.5 degrees by the end of the century, defended by the majority of the global community and maintained at the end of the meeting. An important advance was the creation of a fund destined to compensate losses and damages of the countries most vulnerable to climate changes – an initiative considered historic, since the theme had been postponed for three decades, without even entering the agenda of discussions.

“Another relevant positive point was the large Brazilian participation, with the second largest delegation and the massive presence of companies in the country”, highlighted Rafael Tello, Sustainability director at Ambipar, during the event “The real consequences of the UN Climate Meeting” , edition of Diálogos Estadão Think that, on November 29, discussed the results of COP-27. For Tello, the Brazilian private sector has shown a level of interest and engagement in sustainability goals well above average, which reinforces the expectation that the country will (re)assume a role of global leadership. “Our companies have embraced this theme with much more intensity than we have seen in other countries with the same level of development”, highlighted the executive during the panel, mediated by journalist Michelle Trombelli.

Annie Groth, Institutional Relations leader at Biofílica Ambipar Environment, recalled that the company has been active in the conservation of Brazilian biomes for 15 years, through the voluntary carbon market. “We started as an Amazon conservation company and carbon credits emerged as a way to finance projects that help keep the forest standing”, she described. This market has been growing 30% globally since 2017, but much more significant leaps are expected with the greater adoption of neutralization targets by companies around the world.

Brazil emerges as one of the leaders in the global carbon market, both voluntary and regulated – advances on the subject are expected for the next COP, scheduled for November 2023 in the United Arab Emirates. Contrary to what happens in most countries, which depend on a broad restructuring of the energy matrix, here the main source of greenhouse gas emissions are deforestation, forest degradation and changes in land use.

A scenario of zero deforestation by 2030 in the Atlantic Forest and the Amazon would result in an 82% reduction in Brazilian emissions. “We know clearly where our great challenge lies and what is the central problem to be tackled, but this does not make the issue simple. We need a broad and plural dialogue to transform this problem into an environmental, economic and social asset for the country”, described Tello.

The damages agreement established during COP-27 emphasizes a relevant aspect highlighted by Annie Groth: the growing importance attributed to the Social pillar, the “S” in the acronym ESG, in the current understanding of sustainability. “All of Biofílica’s projects consider the people who live in these areas, as improving the living conditions of these people needs to be a key co-benefit of reducing emissions,” she described.

Multinational founded in Brazil in 1995, Ambipar has grown rapidly and now operates on six continents. The original initiative turned into a solid group, the result of the combination between the organic expansion of the business areas and the acquisition of dozens of companies that have been strengthening the service portfolio, as is the case of Biofílica. “We help our customers to accelerate their processes and commitments to sustainability, not only offering tools, but working with education and awareness to demonstrate how relevant this is, as it increases the capacity for innovation and value creation, in addition to reducing risks“, added Ambipar’s Sustainability director.