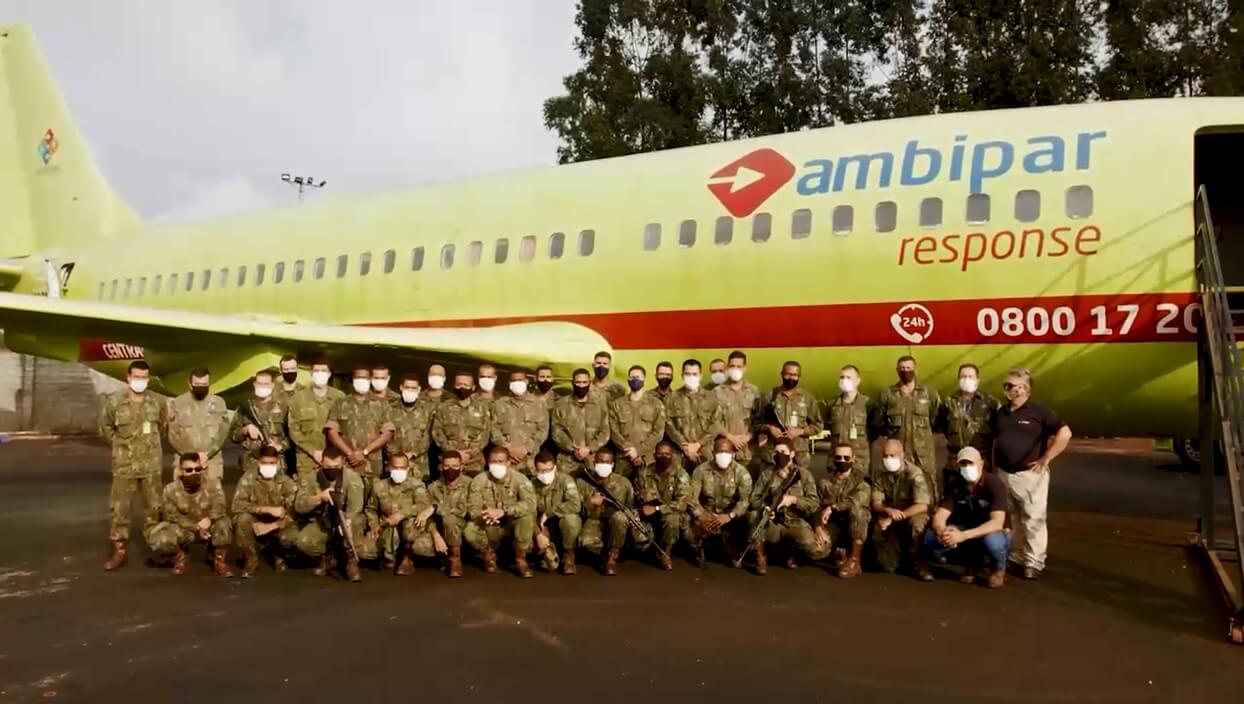 The Chemical, Biological, Radiological, and Nuclear (CBRN)  Defense Response Team made up of Brazilian Navy personnel, held a training course and practical simulations at Ambipar’s training center with the objective of bringing expertise and know-how to the team. The field is the largest in Latin America and was chosen because of its complete structure and diversity of emergency scenarios.

For five days, 45 soldiers were trained with theoretical classes and several practical drills for capacitation. Ambipar’s training together with the Navy is aimed at specialization and professionalism to carry out work with technical cooperation. Brazilian Navy instructors, Sargento Menezes and Sargento Almeida, presented new techniques in training to rescue victims in confined spaces.

The specialists simulated the fall of an employee during an exercise in the smokehouse – one of the emergency scenarios existing in the Ambipar training camp. The victim allegedly suffered a fractured leg and company technicians, along with Navy personnel, needed to help her.

The Navy also carried out physical effort exercises, evaluation of emergency scenarios with a chlorine kit, rescue of victims in smoke houses and confined or collapsed spaces.

Scenario 3 – Fall of a gas cylinder on an employee

Another exercise involved dropping a gas cylinder on top of an employee. The military needed to assess the scenario, checking for possible leaks of the product contained in the cylinder and rescue the victim. For this, a detector robot capable of accompanying the team and checking whether the atmosphere is contaminated with gases invisible to the naked eye was used.

To close the training, the final exercise was done. In the simulation, the emergency was a terrorist attack on a plane from Israel. The aircraft was taken by terrorists and a forced landing was carried out at an airport. At that moment, one of the terrorists who was already on the ground used a truck filled with chlorine to try to cause the plane to explode. The Air Force and Federal Police were already at the scene and exchanged fire with the terrorists. However, one of the truck’s chlorine pump valves was hit, causing the product to leak.

The Brazilian Navy and Ambipar teams needed to prepare to respond to the emergency. The company supplied a water truck, OPG vehicle, a command and control center and kits to contain spilled products. Military personnel needed to carry out the procedure to contain the chlorine kit and use a scrubber to degas the truck.

Ambipar provided a vacuum truck to capture the chemicals while another Navy team was carrying out the rescue and release of the hostages. All victims passed through the decontamination lane and the emergency ended.

For Everaldo Savatin, director of operations at Ambipar, despite being the first joint exercise, the impression is that Ambipar and the Brazilian Navy have been working together for a long time. “The success and objective were achieved and there is already a desire on both sides for this to be the first of many operations. We learned a lot, there was an exchange of experiences and this enriched both institutions”, he says.

According to Commander Do Carmo, “the exercise carried out allows the battalion’s military personnel to expand their technical and professional capacity through the exchange of knowledge and experiences acquired between the unit and the Ambipar instruction team, mainly aimed at emergencies involving dangerous products. In addition, it allows the military to use the entire field of instruction made up of scenarios they encounter in real events, which increases our unit’s readiness level,” he said.